He thinks about baseball and its future

Penn alum and Phillies fan favorite say baseball should be more like America. 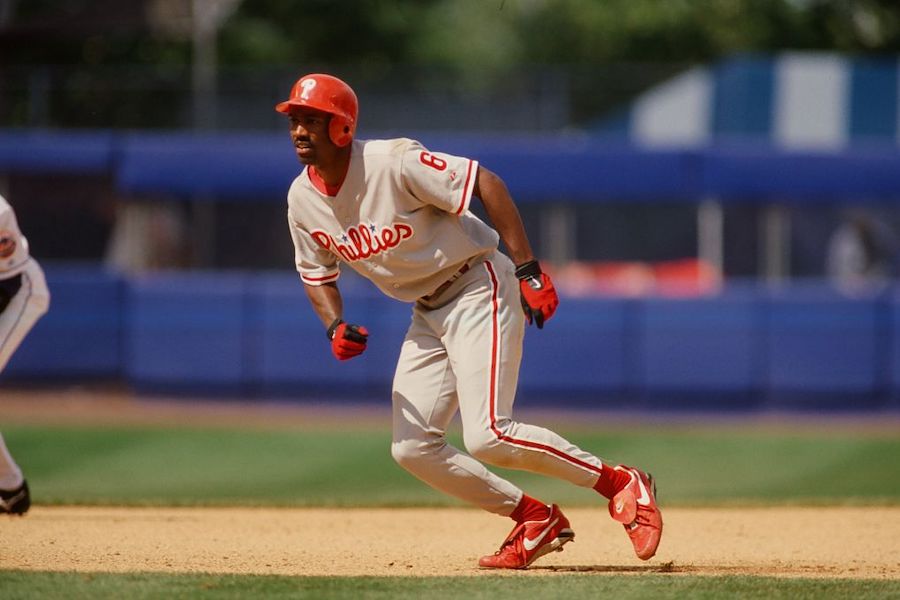 Doug Glanville of the Philadelphia Phillies ran against the New York Mets at Shea Stadium on May 28, 2001, in the Flushing neighborhood of Queens, New York City. Glanville (Penn ’93) will return to the alma mater as Kelly Writers House Fellow on April 25 and 26. | Photo: Sports News through Getty Images

Former Phillies center-back Doug Glanville is one of those rare professional athletes who won’t need a ghostwriter to write his autobiography.

In fact, he’s already done a pretty good job of telling the story of his major league career with his book. The game where I live (2011), his chronicle of the daily experiences of a major league player, namely himself. The book appeared in the columns for which he wrote The New York Times while playing in the major leagues. And he produced the columns and the book, while maintaining the tiring schedule of a major league football player.

Glanville has no problem expressing his views on baseball or any other subject that interests him, which serves him well as a sports commentator for ESPN and NBC Sports Chicago, a writer for Athletic, the Times and other publications and adjunct professor at the University of Connecticut Neag School of Education.

Glanville clearly benefited greatly from his education in Penn. (He graduated with a bachelor’s degree in systems engineering in 1993.) That education also made him a rarity in the world of professional baseball: only four other Penn graduates have played in specializations since 1951, and he was the first graduate. by Black Ivy who does this. We got together to talk about his life and career before his alma mater appearance on Monday and Tuesday as a Fellow Kelly Writers House.

I worked at Penn when you were a student there. I remember you wrote a paper, I think it was your engineering thesis [SEPTA’s] Regional Railway.
Yes. It was kind of two parts, because I also had a feasibility study of the stadium, building one. [a possible Phillies ballpark] at 30th Street, but I got into it by learning about the regional rail system, the difference between it and the subway, and all that stuff. And I’m keeping in touch with Dr. [Vukan] Vuchic [a Penn engineering professor who is an expert on transportation and advised Glanville on his paper; he was one of the faculty members whose work I promoted in Penn’s communications office] also.

But once [Phillies General Manager] Bill Giles called me to his office while we were playing. Suddenly, the phone rang and they told me I had to go see Bill Giles. I thought it was an exchange [him to another team]but he actually called me to ask if he could get a copy of my paper because he heard he had some good transportation ideas.

Did you set out to teach your ultimate career even when you were in college?
Well, no. I can’t say I had a plan. I work more organically, and things get the better of me and say, ‘Okay, this might be an opportunity to explore.

The teaching was in my family, for sure. My mother taught math throughout high school and spent many years as a respected educator. And my father was an educator in Trinidad and Tobago before he moved to the United States. So both had this perspective and sensitivity in terms of education and communication. So I paid close attention to how they provided and shared information in different settings.

It was kind of bloody when I had this opportunity to teach and take some of the things I wanted to share about my career, but especially in terms of how baseball and sports can help us connect with society in general. I felt it would fit in great.

So that’s where my teaching comes from. … And I certainly learned as much as I teach, so the students were great educators for me too.

Speaking of education, Ivy League educated professional athletes tend to be rare. Did you find that graduating from Penn playing professional baseball led to any stereotypical assumptions?
Of course. I’d say all the players carry a tag with them that they’re trying to shake off, so I don’t think it was exclusively for me. But what was unique about being the Ivy League guy, I think, is the etiquette of being too smart for your own good or that you have all these other options and you won’t be so dedicated or focused on this baseball craft. The stereotype that you may not be able to understand and talk to other people because you are on a different level, so to speak.

So there are a lot of perceptions that I had to shake off, some of which started when I was seen as a potential draft pick. And I think it was hard, but in time, [my education and background] they became more and more assets, especially once we reached the big league. Because I think a lot of parents who have had young fans have started to see this as a great example – that you can be an athlete and finish college are things that parents care about. So I became more positive [response] from the fans. And I think that gave me a lot of confidence that I belong there. But it took me a while to get rid of it, to prove that I have a great work ethic and that I will be hired, that I really wanted to do this, and that I had this hardship to endure.

We just celebrated the 75th anniversary of Jackie Robinson breaking the color barrier in Major League Baseball. And yet it seems that interest in gambling is low among young blacks in the United States. Does that bother you at all? Do you see this as something that baseball should address and, if so, does it address?
It’s worrying that I’ve always wanted to see my presence as part of a way to celebrate everyone’s fandom, and [all people] they are represented everywhere, in the leadership and in the fans from all over the country and from the world. I think, first of all, it increases the game. You have the chance to have all these people from different social backgrounds celebrate the game and see the game in their own image. And so in baseball, as in many other sports and businesses in America, the challenge is [overcoming] homogeneity that could lead to a lack of diversity not only in the image, but also to the lack of diversity of thought, perspective, experience, all of which I found valuable in a team setting when playing another team.

And I think baseball is aware of that. I think he’s trying a lot. Tyrone Brooks [senior director of the Front Office and Field Staff Diversity Pipeline Program at Major League Baseball] he did a lot of good work behind the scenes, thinking about how to create opportunities for everyone to support the game. But I think the fundamental challenge is when you have a property that is not diverse at the highest level, and that is what informs and lowers the other lines.

In terms of interest, I don’t think there’s a reason why the percentage of black Major League Baseball players is almost low. I think it’s a combination of a lot of factors and trends that go back decades. There are still so many opportunities, but I think it’s a bigger challenge now than it was 10 years ago, because there are so many other distractions, so many other interests … there’s so much entertainment out there.

And entering [major league] base-ball [as a player] it is difficult because you have to go through these levels. It’s not like you’re a top college player who goes and is recruited right into the NBA system. You have to go through the minor league system. And if you have a middle management that is not sensitive to your experience, you will be stuck, you will disappear.

It’s like going back to my old high school when I was still in the minor leagues, and people were asking me, “When are you going to be a professional?” Well, they are, but [I] he just fell. You’re in a minor league somewhere and nobody knew where you were. And that means a lot of the power of leadership, managers and coaches, over your future, where you can literally be sent into an abyss if you don’t progress.

I think the game would be better served if it was representative of everyone. I think that increases the game. I think it creates a special kind of sensitivity that makes the game better not only on the field, but also off the field.