A state official called Eric Elliott “an immediate and clear danger to public health and safety.” And yet, he still practices. 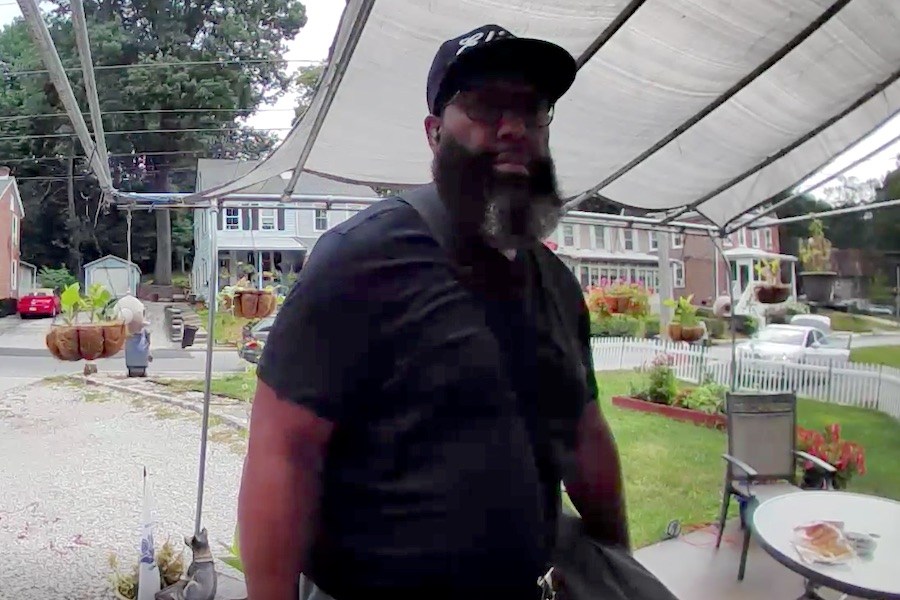 On the morning of Monday, July 25th, in Drexel Hill, a gray car pulled up in front of a house and parked while I was standing in a nearby driveway watching after receiving a tip about the man behind the wheel. That man, Eric Elliott, opened the back hatch and pulled out a portable massage table.

He took the table to the front of the house, where he had to meet his 11am appointment, who had booked him online the previous days for a 90-minute in-home massage using a link found on Instagram page for his company, ElitE Massage and Wellness.

The reader came out and explained that she had an unexpected and last-minute work obligation. She paid Elliott the required cancellation fee plus a tip.

The thing is, Elliott should never have been there. The woman who made the appointment had invited me to observe his arrival at her home to prove that he was giving massages when, according to state court and agency records, he shouldn’t be.

Those records show the 50-year-old’s massage therapist’s license was suspended by the state Board of Massage Therapy on Feb. 9 after a state prosecutor successfully argued that Elliott, who was accused of sexually assaulting a client during a massage, is an “immediate and clear danger to public health and safety.”

Just over a week before the state’s decision, Philadelphia District Attorney Larry Krasner charged Elliott with aggravated indecent assault without consent, a second-degree felony punishable by up to 10 years in prison. He is currently out on $150,000 bail pending trial.

“Eric vehemently denies that it took place,” says Elliott’s attorney, Vincent Lorusso, when asked about the alleged assault. He confirmed the suspension of Elliott’s massage license.

The charge stems from an alleged incident at a home in South Philadelphia last Sunday, September 26. According to court documents, a client claimed Elliott assaulted her during an in-home massage. She told police that Elliott touched her breasts and genitalia and digitally penetrated her without her consent, and that he “pulled her hair and choked her a little bit,” as a Special Investigations Unit detective described her. Victims in a police report. She said she “froze” during the encounter.

According to that police report, the woman told a friend what happened immediately after the massage and her husband a short time later that afternoon. The day after Elliott’s visit to her home, she called the police and was later interviewed at the Special Victims Unit.

“I was in shock,” says the woman, who spoke to Philly Mag on condition of anonymity. “I couldn’t process what was happening to me. I completely froze on the table. I couldn’t move. And after that, I was really mad at myself that I couldn’t fight back.”

The woman says she found Elliott through a referral from a chiropractor. She tells Philly Mag that she had a previous massage with Elliott and nothing untoward happened on that occasion.

“I wasn’t sure I wanted to report it to the police,” she says. “I was so ashamed and really wanted to avoid being part of the criminal justice system. I know how they treat victims. The only reason I decided to report this and come forward now is to protect other women. What was done to me was done. There’s nothing I can do about it.”

What Elliott’s accuser didn’t know when he scheduled his massage was that it wasn’t the first time a client had accused him of inappropriate touching.

In 2016, while doing business under the company name Felicity Massage & Wellness, Elliott, then 44, was arrested and charged with involuntary deviant sexual intercourse and aggravated custodial battery, among other alleged crimes, though in those then he was acquitted and a court ordered. to have the charges expunged from his record as required by Pennsylvania law.

The 2016 charges came after a woman alleged Elliott sexually assaulted her using his hands and mouth during a massage at her Rittenhouse Square home. According to a court document Philly Mag obtained from the official file of the Pennsylvania Board of Massage Therapy, the accuser told investigators she was “in shock and afraid to move.”

“This freezing response is not uncommon in sexual assault and other highly stressful situations,” says Kathleen Brown, a professor emeritus at the University of Pennsylvania who has done extensive research in victimology and sexual assault. “Someone might hear that a woman froze during a sexual assault and not understand why she would do that. But you don’t really know what you’d do until you’re in that situation. I’ve seen that time and time again.”

Like the current accuser, the woman in the 2016 case said she had previously been treated by Elliott without incident.

When reached by phone, Elliott argued that the 2016 charges and the ones he faces today are not, in fact, similar, but declined to comment further. “It’s a coincidence that someone would be accused of similar behavior,” Lorusso said when asked if he was concerned about the apparent similarities. “But I don’t necessarily want to get into the case.”

Elliott’s original trial for that 2016 arrest ended in a mistrial in May 2018, according to a spokesman for the district attorney’s office. When the city retried Elliott in May 2019, he was found not guilty. The Board of Massage Therapy reinstated her massage license in 2019. She originally became a licensed massage therapist in Pennsylvania in 2012.

(Philly Mag reported on Elliott’s arrest in 2016, but dropped the story in 2020 at his request after he was found not guilty and the court record expunged. Like many other media outlets, the magazine reviews court records and other case-by-case factors before granting such requests.)

Because of the deletion, no records of that case since the 2016 arrest are publicly available through the courts. But the Massage Therapy Board maintains a public website where some records are available.

In addition, court records indicate that Elliott has previously been charged with other crimes, sometimes under the alias Gabriel Stevens.

In 1997, he was charged with corruption of a minor, simple assault, indecent assault and endangering the welfare of a child; although he was convicted in Philadelphia Municipal Court, the verdict was overturned on appeal. In 1998, Elliott was convicted of simple assault and sentenced to two years of probation. And in 2005, Elliott was sentenced to five years of probation after pleading guilty to a weapons offense.

At the time this story was published, Elliott was listed as the only ElitE Massage and Wellness staff member on his booking sitewhich remained operational, with time slots available throughout August.

I asked Elliott why he is still practicing massage while his license is suspended. He sent us to Lorusso. “I didn’t know he was still working in that field,” Lorusso said. “I think I’ll have to talk to him about that.”